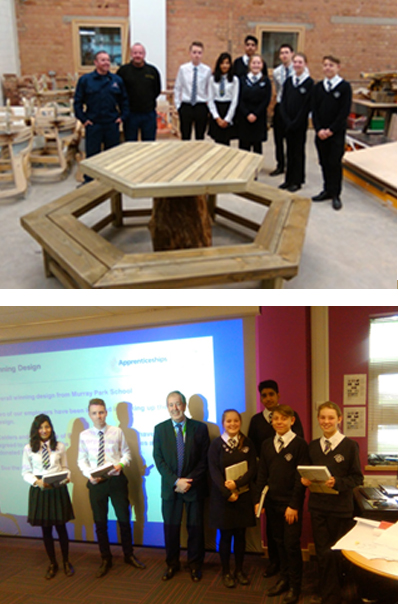 Webs Training invited secondary schools across Derbyshire and Nottinghamshire to get involved in their Apprenticeship Week competition; to design a piece of furniture for primary school children with the theme of nature. Detailed designs, costings and video presentations were requested and the budget for the design was £150.

All submissions were of a high standard and the overall winner was Murray Park School. Their winning design was manufactured by Calders and Grandidge of Boston in Lincolnshire. Gunn and Moore of Nottingham kindly donated the central tree trunk.

Murray Park School were surprised and delighted when they were told that they could keep the manufactured piece. Mr Adam Cantrill, Progress Leader from Murray Park, who mentored the students throughout, thought that the finished product was fantastic, stating that “they must now try to decide where they can display the piece back at the school”.

One of the two staff from Calders and Grandidge who made the piece, John Sear, thought that the design ideas were detailed and well thought out. They had enjoyed making the piece.

All those who entered the competition received a copy of the book Modern British Furniture – design since 1945 by design historian Lesley Jackson. Webs would like to thank the following employers who supported the competition by sponsoring books from the Furniture Makers Company.

A very special thanks goes to Calders and Grandidge Ltd who gave up their time and resource to make up the winning design.

Calders & Grandidge was formed in 1959 following the acquisition of James Grandidge Ltd by Calders Ltd in 1945 although Calders dates back to1820. It is the UK's leading manufacturer of timber utility poles for the communications and power industries, track timbers for the railways, as well as a wide range of fencing, gates and landscape timbers for the agricultural, equine, local authority and domestic markets. Calders and Grandidge Ltd were also recipients of the Special Recognition Award in the Webs 2015 Awards ceremony for their support and commitment to the Apprenticeship programme.